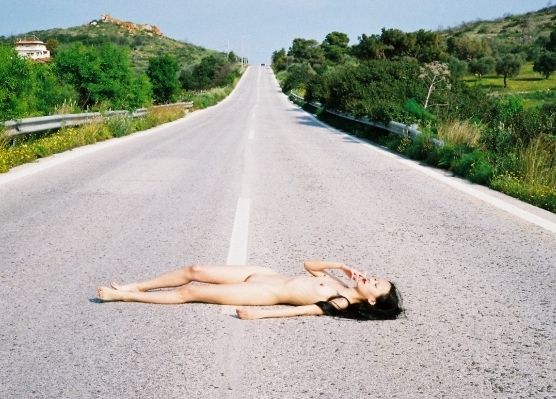 In my own life my bouts with depression had been lifted with the birth of my daughter – but only because I needed them too. So close to fixating on the many unsettling facts of my pregnancy and her birth, I made a daily effort to turn away from the abyss. The artist’s own a careful blend of one part hopeful and one part nihilistic, left me hanging, with nothing much to tip me toward one or the other – a dangerous place to be for any person postpartum. Indeed, some of the subjects themselves are literally on the edge; one on top of a building, nude against the silver roof, body small and pink. As if at any moment, she might choose to leave it all behind.

One photo, of two people embracing, covered in white ash, could be seen as love through apocalypse. A man and a woman cling to each other, her long dark hair drifting lightly over his arm, and his naked back in the center of the photo, her chin nestled into his neck. Around them is a glow that might be as a flashlight illumination their bodies in the otherwise darkness. Gritty paint-like layers of white that look brushed on their bodies hair and face make the impression of dust. They are the center of an explosion, but it’s unclear whether that has come from inside them or from out.

The photo reminds me immediately of a close call accident I had this weekend. I was driving through the countryside with my family and my husband pointed out some cows on the side of the road, to my daughter, seated in the back. I looked to my right and when I turned back to the road I saw we were headed for a huge truck that was halfway through making a turn onto the freeway; its large silver body blocking the lane. In a moment, I grabbed my husband’s hand across the console as I slowed us down enough for the truck to complete its turn. I can’t explain why I grasped his hand; logic would have both on the wheel as I went from 50 MPH to still in the course of 100 feet. But, in looking at the image from the catalogue, I’m reminded that when we perceive loss we might grab close to the thing we have that is safest of all. This would be the hopeful read.

There’s another read though. Because I’m so involved with my daughter, my husband, and even these black and white cows — because I can not stand even an instant of being without them and even though I have seen cows on the side of the road many times in my 40 years and for sure I know already that they say MOO, I turned toward them and in an instant lost sight of my own path, which was going on getting us back home. My own enmeshment with them and inability to separate from their experience of the world almost killed us. That, need it be said, is the darker read.

Much later, when researching the news of Ren Hang’s death, I read a brilliant interpretation of Ren Hang’s work that confirmed the latter: The famous dissent Chinese artist, Ai Weiwei, told TIME that “Hang’s works interpreted sex in a Chinese way, which contained a sense of loss and sorrow,.” Weiwei said, “In Chinese literature or poetry, sex is about something which is impossible. It’s very different from the West. It’s sexier.” This seems to suggest that the darker read is true, that I grabbed my husbands hand because I was about to run us into a truck and that being close to others creates a sense of danger, one that some find to be alluring. Crashes, explosions, destruction – there’s no doubt that we love to see these images – the news is covered with them day in and day out. But the idea that we, humans, the body, and our grotesque need to merge, are the source of all this suffering, that is indeed a confrontational prospect. Or more concretely, when we merge, we explode.